A message (1:35secs) from Aotearoa to support Idle No More and a day of global action on indigenous rights.

“Today I am a Māori woman carving out a space to reflect on our unique relationship with Papatūānuku and our roles as kaitiaki and defenders of our lands, seas and people. This discussion throws a light on how the voices of wāhine are held in certain political arenas and what this means for Aotearoa as we ponder our economic, social, environmental and cultural future.”

Marama Davidson gives an overview of colonial abuse of State spying and surveillance and was one of 12 speakers in a Coalition to Stop the GCSB Bill. Her speech starts at 53 minutes here 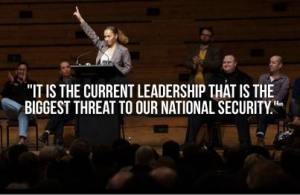 The Coalition to Stop the GCSB Bill organised a powerful line-up of speakers for this public meeting in front of a packed Auckland Town Hall (over 1600 people) and tens of thousands of online viewers — each speaker explaining why this GCSB Bill is bad for our country.

Speakers in order are:

Was asked recently why I advocate so strongly for Kaupapa Maori and for Maori control over Maori frameworks. The question has also been asked recently by a Pakeha academic around who gets to determine the boundaries for kaupapa Maori? It’s simple. We do. For the past 200 years the majority  of our land has been stolen or taken through the use of foreign systems, structures & definitions, our language, culture, knowledge, practices and structures have been systematically subjucated, attacked and denied. Our voices and acts of struggle against oppression have, and continue to be actively targeted and suppressed in order to protect the interests of those who have benefited from such actions. All that we have now we have fought for. All that we have held within ourselves we have struggled for. For 200 years we have lived with other peoples definitions of who we are and what is our place on our own land. It is our time to take that space. It is our right to define ourselves, our struggles, our kaupapa, our frameworks. That does not mean we do not need or want allies, it means we do not want to be defined by others who do not know or feel what it means to live as Maori in Aotearoa. Those who work as allies in that struggle know that is the case and work to challenge the systems that continue to deny fundamental rights. It is no secret that many of those I am fortunate to work with advocate Kaupapa Maori is defined and controlled by Maori. That has been clearly articulated for many years. Until there is significant change in the power relationships in this country that way of being can not and should not change. 200 years of others theorising and researching ON us has brought little change in the colonial inequalities that exist. So why would we want that to continue? That’s a more critical question. The answer again is simple. We don’t.

No te parau tia, no te parau mau, no te tiamaraa, e tu, e tu – For justice, for truth and for independence, wake up, stand up !

Nuclear Free and Independent Pacific Day (‘Bikini’ Day), 1 March, marks the anniversary of the US ‘Bravo’ nuclear bomb detonation at Bikini Atoll in 1954. The explosion gouged out a crater more than 200 feet deep and a mile across, melting huge quantities of coral which were sucked up into the atmosphere together with vast volumes of seawater. The resulting fallout caused widespread contamination in the Pacific.

The people in the Marshall Islands, and elsewhere in the Pacific, were used as human guinea pigs in an obscene racist experiment to ‘progress’ the insane pursuit of nuclear weapons supremacy.

Nuclear Free and Independent Pacific Day is a day to remember that the arrogant colonialist mindset which allowed, indeed encouraged, the horror mentioned above continues today and that the Pacific remains neither nuclear free nor independent. Today we acknowledge and remember those who have suffered and died in the struggle for independence around the Pacific; those who have opposed colonisation in its many forms and paid for their opposition with their health and life; and those who have suffered and died as a result of the nuclear weapons states’ use of the Pacific for nuclear experimentation, uranium mining, nuclear weapons testing and nuclear waste dumping.

We remember  France  as a brutal coloniser of Te Ao Maohi (Tahiti) carried out a total of 193 nuclear tests  from 1966 to 1996. On  Nuclear Free and Independent Pacific Day we remember that the arrogant colonialist mindset which allowed and, indeed encouraged, the horror mentioned above . Today  the Pacific remains neither nuclear free nor independent.

Earlier this month the Pacific governments of Tuvalu, Nauru and the Solomon Islands supported moves to re-inscribe Maohi Nui into the United Nations’ decolonization list.This followed a resolution of the Melanesian Spearhead group in Nadi last year to support self-determination in the French territory.

For too long Maohi Nui ( Tahiti)  has been fighting for her freedom and it’s time we, as a Pacific family, stand up with a united voice to offer our support.”It is critical that we see the connections so that we  as Indigenous Peoples of the Pacific  can continue to support each other across Te Moana nui a Kiwa, the Great Sea of Kiwa, and know that we are not alone in these struggles.

“Ideas this week talks to Marama Davidson, David Geary and Clayton Thomas-Muller about the Idle No More movement which deals with the rights and identity of First Nations people, starting in Canada with a predominantly female lead.”

Cree activist Clayton Thomas-Muller is first up in this interview with Chris Laidlaw.

David Geary playwright of Nga Mahanga descent is second up (around 22mins in) as a Vancouver based New Zealand playwright.

Marama Davidson of Te Wharepora Hou features as the final interviewee (around 40mins in).

You can listen to the interview here:

Please go to the above link where Occupy Savvy interviews Marama Davidson around global movements and the role of women in them.

“In the Occupy Movement in Aotearoa, my small contribution was merely to speak up as a Māori woman and for our group Te Wharepora Hou (TWH). TWH is a group of wāhine Māori who support each other to use our voices collectively and individually as we feel the need to. The imperative to speak up recognises that for too long there has been a silencing of the diverse voices and opinions of Māori women, in spite of the incredible staunch wāhine that have been instrumental to positive change in our communities and our nation. Our purpose is to have a say on all issues that impact on the well-being of whānau (family), hapū (extended family) and iwi (tribes) and our natural living system. By this standard we could provide a critique on every issue under the sun and moon but we do what we can when we can. We do not claim to have any mandate to speak on behalf of all Māori but we surely claim our voices as Māori women, as mothers, as grandmothers and as members of our respective whānau, hapū and iwi.” 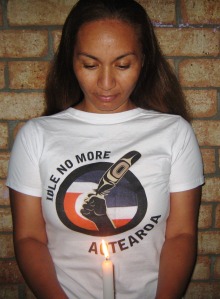 Please go to the above link for my post on indigenous rights at The Daily Blog.

Just my own personal ‘what’s on top for me right now’ rant.

1. Ongoing abuse of indigenous peoples by coloniser Canada on that Great Turtle land.
We know this here.

2. Ongoing resistance by those indigenous nations to maintain their sovereignty and responsibility over their lands and peoples. They have never been idle.
We know this here.

3. Canadian colonising government and Bill C45 – latest smack in the face that again oversteps indigenous authority over their lands.
We know this here.

4. Four wahine of that land stand to protect our earth Mama against slaughter and call for indigenous authority. So begins Idle No More.
We have seen such stands here.

6. Today on day 24 of Chief Spence’s commitment, Harper agrees to meet with ‘First Nation Leaders’. We celebrate that for Chief Spence and her peoples. Her solid stand is inspiring, but we are also wary. Because we have seen how those in power do not like to share it.
We know how that works here.

Any opportunity to shine an internationally strong and bright torch on the same issues that our people have been fighting for generations, is an opportunity worth pouring my own energy into. So I am happy to lend my own voice to it, and support others who wish to do so.

I am livid. I am proud. I am hoha. I am inspired. I am powerless. I am brave. I am angry. I’ am thankful. I feel ripped off. I have aggression in me. I am also in love – with my people here today, those who are gone and the ones yet to arrive. I am in love with my people who have always been strong, awake and feisty.