A snapshot of this past week in politics has reinforced that we, the Indigenous of this land, must not lose sight of our Indigenous truths. We must guard them fiercely; we must denounce any slow creep of imperialism upon our understanding of ourselves. We must be loyal first to our own truths; and have the courage to reject the colonial legal fictions that have emerged from an inherently racist system designed to annihilate and oppress us. The events of this week emphasize, more than ever, that our vigilance is absolutely necessary if we are to genuinely realize our internationally recognized right to self-determination.

The Status Quo is Unacceptable
Only those with a vested interest in propping up continued colonial oppression of Indigenous rights seek to defend the status quo. They publish articles on how harmonious the commemorative events at Waitangi have been this year, they wax lyrical about the dollar value of meagre Crown investments into impoverished Māori communities, and they liken colonial benevolence to satisfying an ongoing obligation to peacefully assimilate Indigenous people into the acceptable ‘mainstream’. We’re being told, repeatedly, to be happy with our lot. The problem is, if your inherent right is to self-determination, these measures fall woefully short of our rights and entitlements – no matter how sweetly giftwrapped and embellished.

The further we move from our truths, and the more we align ourselves with damaging colonial fictions, the more violence we allow colonialism to inflict upon the psyche of our people. Thus we see this week manifestations of this colonial drift creeping into our sacred spaces; we see armed police forces permitted onto the marae atea, we see unprovoked attacks on the mana and tapu of Māori women by Māori alpha males aligned with the Crown, we see speaking platforms provided to the promoters of hate, we see people with calculators under the table horse trading the integrity of our natural environment. The insidious reach of colonial legislation has become so incrementally intrusive that it permits the law to shoot our people in the streets. It purports to unilaterally determine which parts of our history are taught, and it empowers itself to snatch Indigenous children from the wombs of our mothers. That some of the Crown officials sought this year to discuss that in our Indigenous language is a merely a distraction from the fact none are committed to the actual substantive issues that would force a genuine recognition of our rights and entitlements – none are committed to acknowledging and deconstructing the colonial fictions upon which their tenuous positions are founded.

“The insidious reach of colonial legislation has become so incrementally intrusive that it permits the law to shoot our people in the streets.”

We Are Not ‘Fighting For Our Rights’; We Already Have Them
Notwithstanding the ongoing incursion of colonisation, Indigenous people have an existing and operable right to self-determination. That self-determination extends to include our right to self-government, and a suite of territorial rights in relation to our natural environment. The ongoing subordination of Indigenous law by the State, and the legal barriers compromising the ability of Indigenous populations to proactively protect our territories and our populations, is inconsistent with Te Tiriti and international law. Despite the clear language and brevity of the Treaty of Waitangi, the Crown purports it is confusing and requires further interpretation. That interpretation is found within Crown-defined ‘principles’ that unilaterally, but significantly, erode the otherwise clear agreement between Māori as a sovereign people, and the British Crown.

Treaty Principles Are Legal Fictions that Dispossess Us of Our Tiriti Protected Rights
Through a Crown lens Article I rights about sovereign authority move from being about self-determination and ‘absolute chieftainship and authority’ to being about ‘partnership’ subject to Parliamentary supremacy. Not an equal partnership, but one that cedes all interests from one nation to another.

Territorial rights contained in Article II move from being about ‘full, exclusive and undisturbed possession’ to being about ‘the right to be consulted’.

Social and cultural rights in Article III are reduced to ‘the right to participate’ and ‘be a New Zealand citizen’ and be subject to ‘one law for all’ and, at the Crowns discretion, to be acknowledged as a particular class of ‘stakeholder’.

The New Zealand government claims, but has no constitutional basis for, ‘parliamentary supremacy’ and asserts the only right to govern and make laws in Aotearoa/New Zealand. This is in direct breach of the United Nations Declaration of the Rights of Indigenous Peoples, and the distinct obligations owed under the Te Tiriti o Waitangi. Inconvenient for the Crown? Yes. Factual? Also yes.

To be clear, this is nothing but pure racism and colonial patch protection, dressed up as law and policy. Legal fiction, created to serve, and maintain, an empire building agenda. This is racism in its most institutionalised form and remains totally unacceptable. The Crown cannot simply ignore the set of rights and entitlements protected by Te Tiriti, and reaffirmed by international law; and we must not allow them to do so. We don’t negotiate rights, they are inherent and already exist – we are challenged with implementing them, honourably, and bringing the treaty promise to fruition. Of course this is challenging, but it is equally necessary if we are remotely interested in justice.

Constitutional Change Is The New Black
Piecemeal accommodation of selected aspects of our culture within a colonial frame is not the genuine realization of our rights needed to shift the status quo. We ought to reject these accommodations for the distraction they are. The reclamation of our legitimate right to self-determination is anchored in our continued adherence to our Indigenous truths. The pathway must therefore be one of Indigenous reclamation and emancipation, for it is an Indigenous lens that will provide the pathway ahead, not a colonial one.

The constitutional arrangements of this country, contained in Te Tiriti o Waitangi, require of us a balanced power sharing; one that accommodates not only a peaceful co-existence, but also the concurrent presence of genuine and undisturbed Indigenous self-government. Our Indigenous right to self-determination was not displaced by Te Tiriti o Waitangi; it was affirmed and protected by it. That sovereignty was never ceded on the 6 February 1840 is an established fact; reconfirmed repeatedly by Indigenous tradition, the international legal community and by the New Zealand government’s own Waitangi Tribunal. That is the crux of it. Each party to Te Tiriti o Waitangi is challenged with honourably implementing it.

“That sovereignty was never ceded on the 6 February 1840 is an established fact; reconfirmed repeatedly by Indigenous tradition, the international legal community and by the New Zealand government’s own Waitangi Tribunal.”

The Crown, and the non-Māori population of this country have their own burden to wrestle with; morally and politically – they must bear the weight of change also. They must have the courage to confront the uncomfortable, and do the yards to critically, but urgently, dismantle systems of oppression from which they continue to benefit. They must not mistake window dressing as substantive change, but must instead accept the challenge to unpack the colonial fictions upon which their privilege is based. 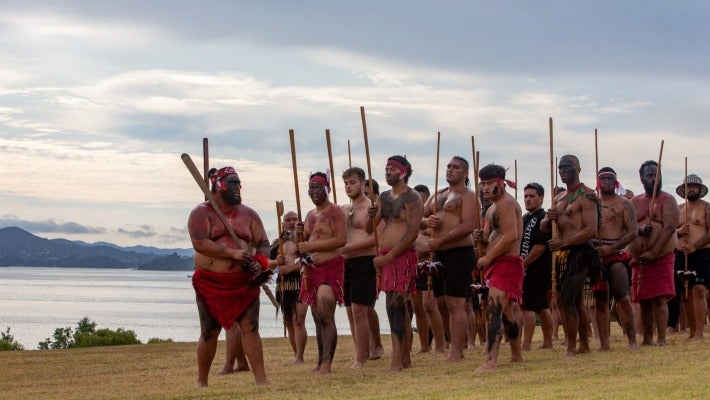 Māoridom has its own healing to do; we must rebuild from colonial interruption so that we are positioned to manifest our right to self-determination. We must retake our legitimate sovereign place within the global family of nation, where our unique worldview and ancestral knowledge is required to face the global issues that will shape the future – the climate crisis and the collapse of the current economic order. We have to propel the constitutional change within Aotearoa/New Zealand that is necessary in order for our rangatiratanga to be restored. To do so we must, at a very minimum, have the continued courage to reclaim and champion our Indigenous truths as the foundation for the pathway ahead.

Te Wharepora Hou is a collective of wāhine who are mainly Tāmaki Makaurau based, but we have strong participation from wāhine based elsewhere in Aotearoa and the world. We have come together to ensure a stronger voice for wāhine and are concerned primarily with the wellbeing of whānau, hapū, iwi and all that pertains to Papatūānuku and the sustenance of our people. View all posts by Te Wharepora Hou