We are honoured to have our sister Tuiloma Lina Samu pay tribute to the recent passing of Pacific Climate activist Koreti Mavaega Tiumalu. Lina and Koreti both personify the strength and love and service Indigenous women give to their families, communities and our wider region and the world.

In loving tribute to our dear beloved sister Koreti Mavaega Tiumalu who passed away on Sunday 2 July in Wellington.

Koreti was the Pacific Co-ordinator for 350.org and she  both  strong connections, networks. and lived experience of of the hard fought efforts already in existence around the Pacific . She inspired and  mentored a lot  of the work that is being done around the Pasifiki/ Moana/ Moana-nui-o-Kiva/ Pasefika/ Pasifika, humbly leading and guiding the Pacific climate justice movement amongst our Pacific nations and peoples.

I recall our friendship and professional support we gave each other over the years.

In 2012 I travelled  to the Rio +20 Conference in Rio de Janeiro sponsored by the Asian Indigenous Peoples’ Pact (AIPP) to represent Pasifika.

Before leaving I got a call from a woman named Koreti, was going and was trying to get a Pasifika community meeting up and running at St Anne’s Catholic community hall in Manurewa.

I was so thrilled that she’d made contact to ask me to come and speak at this fonotaga for Pasifika communities about 350.org and her new role as Pacific Co-ordinator – I said YES without hesitation!

When I realized that she was connected to me through marriage, I was even happier to support! Her niece Amataga Iuli and Amataga’s brothers who are connected to me through their father’s Sapunaoa, Falealili aiga (the nu’u where I get my suafa matai “Tuiloma” from) were there well before the start of that meeting in the Winter of 2012, to help their beloved Aunty set up the hall and the food before guests started arriving.

At that fono I also remember the powerful speech that Koreti gave to the main session and the beautiful puletasi that she wore. She was so nervous, but I knew she’d be glorious as she was! I told her to have a little lotu before her speech and to have something with her, something from her aiga or her husband that would help to settle her so that she wouldn’t feel overwhelmed and/ or alone. She was magnificent! I hope that someone posts up her speech from that PowerShift December 2012 in Auckland!

In 2013 Koreti ran another Pasifika fonotaga this time at the Ellen Melville Hall in the CBD Auckland. She asked me to present at that fonotaga as well. In 2013 she was going real hard to build upon the exceptional networks of trust and love and loyalty that she built around the Pasifika region for 350.org.

I  had my reservations about t organisations and the resourcing of such important work in the Pasifika, often critical of Koreti doing so much on so very little – but holy shit did she do it !

With such grace, dignity, honesty, love and loyalty – everything that 350.org has in the Pacific – its reputation, its good name, its everything is owed to this beautiful strong sister Koreti Mavaega Tiumalu!  EVERYTHING!

She recently travelled to support our indigenous sisters and brothers in the Alberta who are continuing their ongoing struggles of protection against the wreckage and utter devastation that tar sands mining is having on their environment. 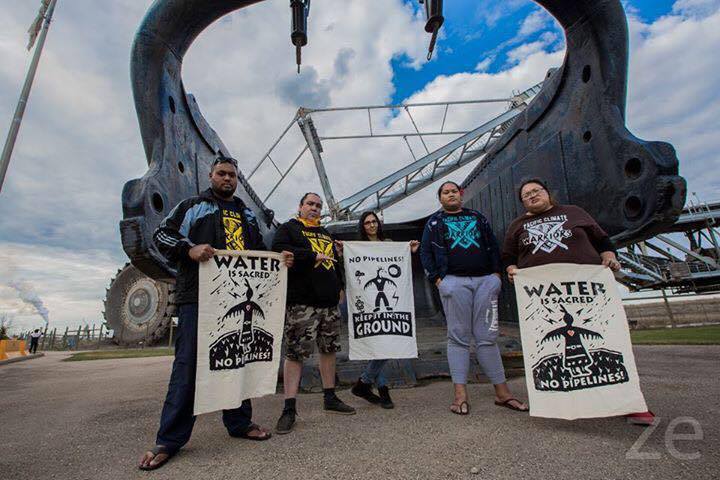 She was an innovator of the “Raise a Paddle” movement to bring about our standing in solidarity with everyone around the world especially first nations and indigenous people.

Fighting hard to bring to authorities in power to justice for allowing companies to destroy everything- to make them answerable and accountable for taking us without consequence to destruction and ruin of our natural resources:

My last communication with Koreti was about getting out on the waka at Te Whare Waka in Wellington, to show our tautoko/ tapua’iga/ solidarity with our mana whenua aiga/ whanau during the warmer months in Whanganui -a-Tara Harbour.

I’m going to keep to that pact we made and organise a tribute maarunga i te waka. And every time I raise a paddle wherever I am in Aotearoa, Samoa, in the Moana nui a Kiwa/ Pacific and across the world – I will always remember Koreti and EVERYTHING she did to advance and enhance our Pasifika peoples’ profiles and viewpoints/ stance in the local, regional, nationwide and global work of climate change.

Amuia lava le masina – e alu ma toe sau”. Blessed is the moon as it goes and returns – but not us, no not us.

Educated at Nga Tapuwae, University of Auckland and about to complete a PhD (Health) through the Whariki Research Centre, School of Public Health, Massey University. Founder of the Whariki Whaiora & Family Whanau services for mental wellbeing.

Te Wharepora Hou is a collective of wāhine who are mainly Tāmaki Makaurau based, but we have strong participation from wāhine based elsewhere in Aotearoa and the world. We have come together to ensure a stronger voice for wāhine and are concerned primarily with the wellbeing of whānau, hapū, iwi and all that pertains to Papatūānuku and the sustenance of our people. View all posts by Te Wharepora Hou