Delegates at the National Māori and Indigenous (MAI) Doctoral Conference, being held at Victoria University of Wellington, today voiced their collective support to the Sioux nation of North Dakota at Standing Rock.

University of Auckland MAI academic leader, Dr Mera Lee-Penehira states, “The people occupying Standing Rock are being subjected to the same and worse levels of police brutality and intimidation we suffered here in the 1970s on Bastion Point, and again during the shameful Spring Bok tour. It is our duty to speak out against such atrocities.” 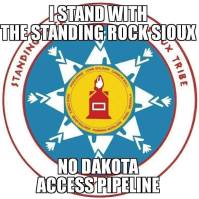 The long standing disagreement between the U.S. Government and the Sioux Nation centres on what has become known as the Dakota access pipeline. It will cut across the sacred lands of the Sioux Nation, presenting a serious threat to both land and waterways. “It’s an issue of serious risk to environmental sustainability and an issue of the sovereign right of native peoples to protect their land and to protect water, the very essence of life”, said Dr Lee-Penehira.

In her keynote address, Harvard graduate and lawyer Natalie Allan-Coates said, “The people at Standing Rock have called for support from Māori, our strength and solidarity is important to them. We need to do whatever we can to help.” Mrs Allan-Coates recently visited Standing Rock and spent some time working with the onsite legal advisory team.

Mrs Allan-Coates was joined by keynote speaker Kingi Snelgar in condemning the current violence of both private security firms and state authorities. As a human rights observor at Standing Rock Mr Snelgar noted, “The violation of human rights has to be brought to the world’s attention and it has to stop.”

Tāwhanga Nopera, University of Waikato doctoral candidate states, “It is unacceptable that Indigenous peoples, who are simply exercising their sovereign right to peacefully protect their lands and waterways, are subjected to such violence and degredation. We must say something and show solidarity”

Conference delegates voiced their commitment and solidarity to Standing Rock as Māori and Indigenous academics. Associate Professor Leonie Pihama, Director of Te Kotahi Research Institute (University of Waikato) says “A key role for Māori and Indigenous scholars is to to challenge the continued oppression of our peoples both locally and across the globe. We must not be complacent. The Protectors at Standing Rock are standing to protect this planet, Papatūānuku, for all people. They are placing their lives on the line to ensure that current and future generations have access to life sustaining water. We have an obligation to both bear witness and to voice our strong support for their stand”

This blog includes three Submissions to the Māori Affairs Select Committee on New Plymouth District Council (Waitara Lands) Bill 2016 presented on November 18th at the Novotel New Plymouth. The Submissions are from Dr Leonie Pihama, Veronica Tawhai and Ngaropi Cameron.  We hope over the next few months to add more submissions here to update what is happening with the Pekapeka Block and Waitara Leaselands that were confiscated by the Colonial government in 1865.

Comments on the Bill.

The land was originally confiscated by the Crown from Waitara hapū in 1865 under the New Zealand Settlements Act 1863. Waitara was then surveyed and renamed Raleigh by the Crown.

The Te Atiawa Claims Settlement Bill, which is currently before the House of Representatives, contains an account of the historical relationship between Te Atiawa and the Crown. That Bill also contains factual acknowledgements and an apology from the Crown.

In 1876 the Crown vested land in the Waitara Harbour Board and the Raleigh Town Board for harbor improvement and municipal development. During the next 70 years, further land was vested in the Council’s predecessors for those purposes. (174-1)

The Pekapeka Block and other Waitara Lands held by the New Plymouth District Council are stolen lands. The general Waitara community have benefited for long enough at the detriment of the hapū and iwi of Waitara.

The ongoing exploitation of Waitara Lands is also embedded in the proposal that the expected $60million income stream will be used for the community as a whole. Again the wider community benefits from the theft and sale of hapū and iwi lands within Waitara.

TRC has the right to half the net proceeds relating to 1940 Act land.

Clause 25 requires TRC to apply its share within Waitara, or for the benefit of the Waitara community or parts of it (eg public transport to New Plymouth).

Alternatively, TRC may include in its long term plan or annual plan a proposal to apply the amounts more generally within the region, but including benefit to the Waitara community.

TRC also has the option, if it wishes, to apply the money to meet the costs it has al- ready incurred in respect of the Lower Waitara River Flood Control Scheme. (p.13)

The Waitara Harbour Board’s land holdings included foreshore, and grazing and town sections in the Waitara township. The Waitara Harbour Act 1940 vested the foreshore between the high and low water marks on the East and West Beaches in the New Plymouth Harbour Board (now Taranaki Regional Council (TRC)) as a foreshore en- dowment for harbour purposes. The balance of the land was vested in the Waitara Borough Council (now New Plymouth District Council) for municipal purposes subject to section 9 of the Act. The foreshore endowments reverted to the Crown under section 36 of the Local Legislation Act 1952.  (p.2)

The assertion within the Bill that the TRC maintain its control over the lands and associated income is fundamentally flawed. As with the process with the NP District Council these lands are stolen and must be returned.

Without justice, there can be no peace. – Martin Luther King, Jr.

Regarding the Crown’s responsibility of redress:

Regarding the stated purposes of the Bill:

Regarding the importance of redress and reconciliation:

In summary I am asking the Select Committee to REJECT in its entirety the New Plymouth District Council (Waitara Lands) Bill 2016.

(1) A local authority must—

(a) Establish and maintain processes to provide opportunities for Māori to contribute to the decision-making processes of the local authority; and

(b) Consider ways in which it may foster the development of Māori capacity to contribute to the decision-making processes of the local authority; and

(c) Provide relevant information to Māori for the purposes of paragraphs (a) and (b).

a) Undertake authentic and genuine dialogue with the Manukorihi and Otarua hapu about the stolen Pekapeka lands and that the NPDC put a stop to its ongoing shameful and disrespectful conduct in attempting to further alienate the Pekapeka from both hapū.

b)To return the stolen lands to both hapū without ‘strings attached’.

c) To support Manukorihi and Otarua Hapū, to utilise the hapū lands for their authentic purpose this is to benefit the collective not just a few people.

d) We recommend that the Select Committee consider and give weight to our request that the NPDC be directed to return fair reparations to lease holders who have been paying a lease for their own stolen lands and that the time frame commence from the Sim Commission Report to the present day.

e) We recommend that the Select Committee establish an independent inquiry, funded by the Crown, to fully investigate endowment and leasehold properties on the Pekapeka in Waitara that have been privatised since the restructuring of local government in 1989. And that the inquiry requires the NPDC to give a full account of what the proceeds gained from the stolen property was spent on including the amont spent on legal fees that have been funded from Waitara leasehold payments and sales.

Thank you for your consideration of the above submission